The newest staff member of AFLAC Cancer Center is more attached to the hospital than anyone else – because the facility had saved her life twice!

She was just 2 years old when Montana Brown was diagnosed with a rare form of cancer called rhabdomyosarcoma which affects connective tissues. She spent most of that year at the cancer center, receiving chemotherapy.

Despite the condition, her parents made sure to give her a semblance of a normal life, going on movie marathons even while she was confined at the hospital.

Thankfully, Montana survived. After being free of cancer, she went back to school and lived a rather normal life. In fact, she had become a cheerleader and has been attending competitions on cheerleading and competitive gymnastics – surely a miracle considering she had cancer of the connective tissues. 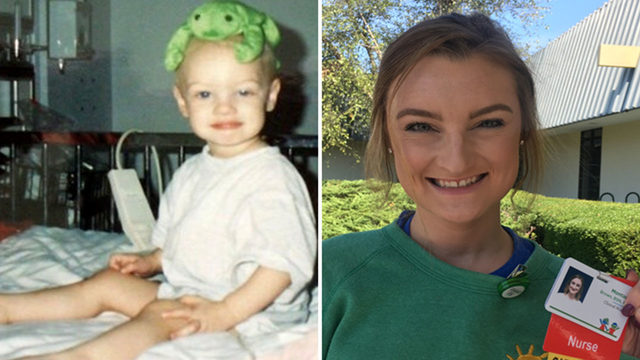 But fate wasn’t done with Montana yet. She was tested yet again in high school.

“I had just tried out for my high school cheerleading team. I actually ran a mile while I had cancer and had no idea. … There weren’t symptoms but my mom and dad could tell that something was different about me and they knew that something was a little off,” she revealed.

After the diagnosis, she was told to stop cheerleading and gymnastics. She spent the next months undergoing chemotherapy and radiation.

The care and attention she received from the nurses at the cancer center inspired her to become a nurse so she could give back the same compassion she received to other cancer patients. She picked pediatric oncology, knowing firsthand how it felt to have cancer as a child.

Over 20 years after surviving cancer, she returned to the hospital that saved her life twice.