Jozef Maynard Erece is definitely not an average teenager.

Accomplished at a very young age, Erece will soon become Australia’s youngest lawyer. In April 17, Erece obtained his law degree from the University of Southern England merely three years since he started taking the program. 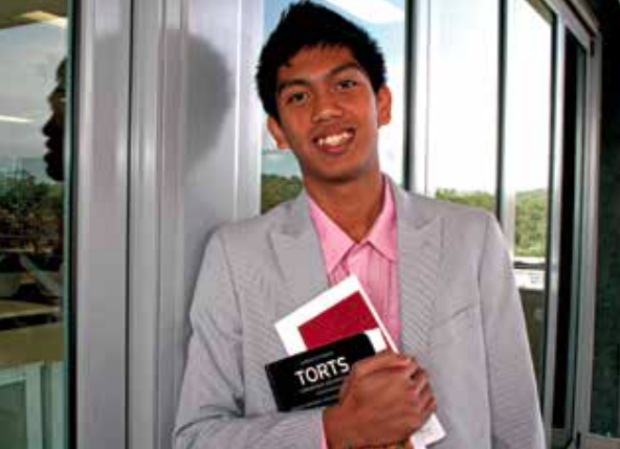 The Australian Scholarships Group even recognised Erece as “the youngest lawyer to graduate at 18 years in the Southern Hemisphere.”

Even after graduation, Erece has kept himself busy. He is currently working on a Graduate Certificate in Legal Practice at Queensland University of Technology.

Come June, the young Filipino achiever will be able to practice law in Australia.

A gifted child, the son of Maynard Erece, an educator, and Dr. Josephine Ana Borja, was able to read at the age of three. When he reached the age of 8, he was able to publish his own book at New Zealand.

Since his schooling was accelerated by three years, Erece graduated from St. Peter’s Catholic School in Cambridge, New Zealand  as Valedictorian at the age of 11.

Stanford University, a prestigious school in the United States, invited Erece to study in their Institutes’ Program, a special program for the gifted youth. But Erece turned down its offer and chose a different path.

Erece not only excels in academics. In fact, the 6-foot-two-inches Pinoy is an accomplished basketball player and taekwondo jin. Furthemore, he also plays violin.

How to Become a Lawyer in the Philippines

A bachelor’s degree with units in English, History, Social Sciences, Math and Rizal is required in order to enter any law school in the Philippines.

Aspiring lawyers need to take Bachelor of Laws, a four year graduate program. The Supreme Court of the Philippines requires taking up of eight major subjects including  Civil, Criminal, Political, Commercial, Tax, International, Labor, and Remedial Laws for the completion of the  Law Program.

To become a full-fledged lawyer in the Philippines, one must obtain an average of at least 75% with no grade below 50% in any subject to pass the Philippine Bar Examination conducted by the Supreme Court of the Philippines. Also known as the Bar Exam, it can only be taken six times.