By the time he was 11 years old, Tanishq Abraham has already graduated from college three times! He graduated with associates degrees in science, math, and a foreign language from American River College in 2015.

He’s too young to work, that is a fact, but it seems that he does not want to find work yet, anyway. In fact, Abraham is on his way to taking up another college course, majoring in biomedical engineering by the time school starts in September 2016.

At 12 years old, he’s surely going to be the youngest in class for the course but he expects that this would not deter him from reaching his dreams – after all, this would be his fourth college degree! He even revealed that the first time he attended a college class, he did not feel nervous at all. So, he expects that his first day in biomedical engineering would also be a breeze. 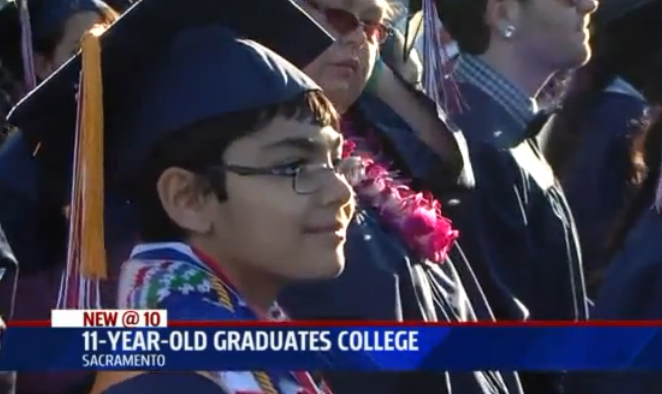 Although he has clear plans for the future, such as becoming a medical doctor by the time he’s 18 years old (that’s the age everyone else graduates from high school!), he’s a bit torn as to where he would enroll for his fourth college degree because he’s been accepted in both the University of California (UC) Davis and UC Santa Cruz.

Whichever will be his final choice, he is surely in good hands as both schools are excellent choices. Besides, Abraham is also expected to excel wherever he would enroll since not only has he proven that by graduating thrice in college at such a young age, he’s also one of the youngest members of Mensa, the impressive IQ society, having been accepted at a tender age of 4!

This young man is certainly one of the most brilliant minds of this generation and could soon be creating impressive discoveries and be discussed under the same breath as Albert Einstein and Stephen Hawking. Incredible!