A Chinese guy prepared for a unique proposal to his lady love by buying 99 iPhones – all iPhone 6! – and lovingly arranged them in the form of a heart.

The man quickly became a classic example of the saying “Money can’t buy you love” when his girlfriend actually refused his proposal. 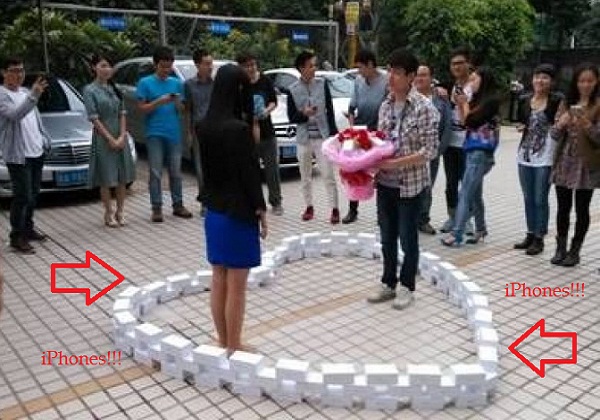 Now that she said “no”, however, I think he needs a little help determining what he has to do with the 99 iPhones.

Well, this is not a ‘business idea’ per se, but millionaires and billionaires are known to give away to the less fortunate via philanthropic work. He’s got to start somewhere, right? Plus, those phones would only remind him of his rejected proposal. So, what better way to forget this rather embarrassing incident than to give those phones away?

He does not need more capital for the business because he already has 99 iPhone stocks on hand. Of course, an iStore would need a lot of capital and might even require franchising but he is only going to sell iPhones. So, technically, he just might not need franchise for an iStore – it is just going to be an iPhone 6 store.

Well, now that he has begun selling the iPhones, he might as well give the iStore a go. I bet that iStore franchise (is there one?) would be too expensive – but they just might allow him to open one out of pity for the rejection. Plus, it would be great publicity for the much-bashed iPhone 6.

He could hire someone to design the website or even create one from scratch using templates he can easily find online. He also has to set up accounts for receiving the money from his customers.

Well, technically, it will be difficult, if not impossible, to open a ‘Facebook store’. There are, however, many ways to sell on Facebook. He could begin by joining seller groups from his locality.

6. Sell the iPhones to his friends and family

Those are going to be a supportive bunch, so they would probably buy his iPhones. However, he has to be prepared for these people to laugh at him a bit and haggle for him to lower the price, because they knew the circumstances behind the sale.

7. Sell the iPhones to the proposal audience

If he was a business-minded and clever person, the moment the girl rejected him, he could have made light of the situation and tell her he was just trying to test her reaction but is actually opening an iPhone 6 business with her. Then, they could both sell the iPhones to the people who have gathered to watch.

That should save him face, somehow, plus earn him back the money he spent on those gadgets.

8. Peddle the iPhones in the streets

What is left of the iPhones, he could probably sell in the streets. There are still plenty of people who wish to get their hands on the gadget. Of course, he has to sell those in a price lower than those in the stores, yet he would still get back a portion of his money this way.

9. Swap the iPhones for a food cart business or franchise

If he is really clever, he would make an exchange deal with someone selling a franchise in the food industry – that is, if he could not sell the remaining iPhones. Food carts are actually affordable. The owner just might agree with the exchange deal.

10. Get the iPhones refunded and start a new business

We’re not sure where he got those iPhones, but he could probably get those refunded if he tells the store what happened. That’s a bit impossible because many shops don’t usually appreciate gadget returns for refunds, especially in iPhones this many – however, he could still try.

With the money from the refund, he could start a new business – of his own preference. It could still be gadget-related, though he might want to diversify by selling other phone brands and various accessories.